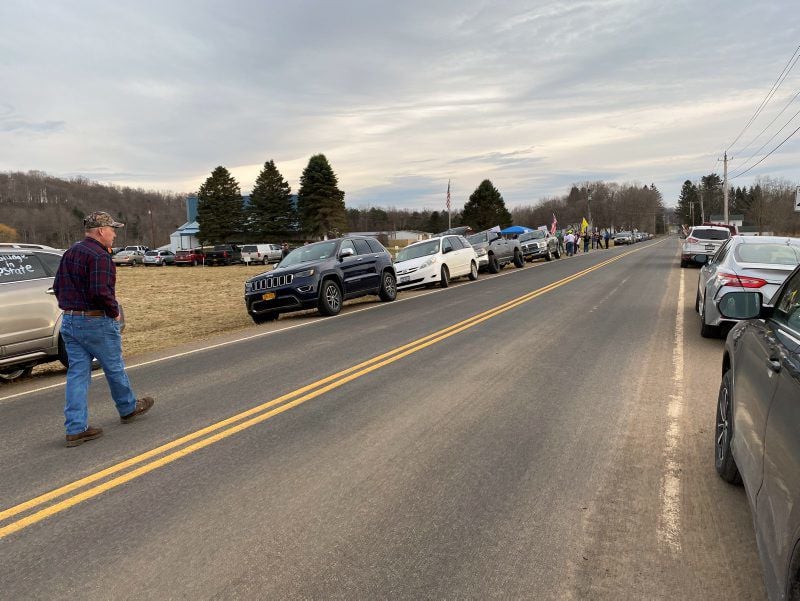 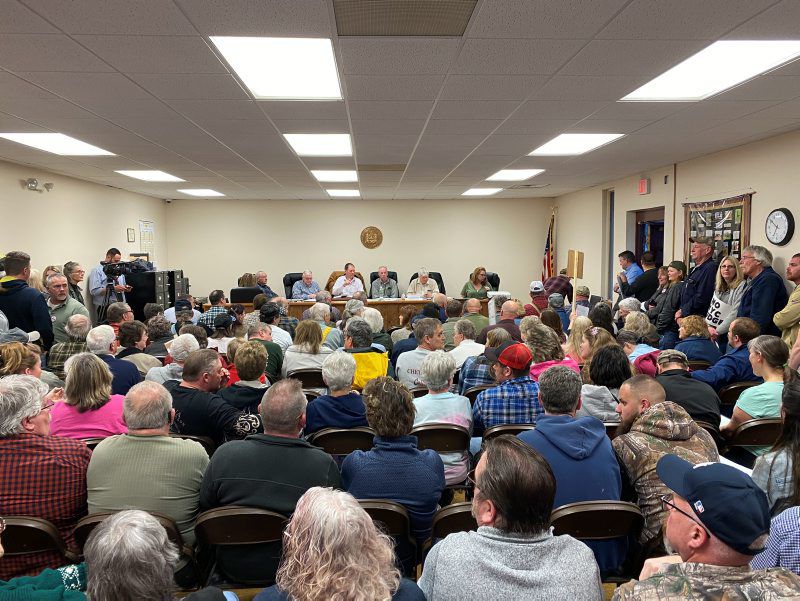 The Butler Town meeting was standing-room only as an estimated 200 people swamped the building and flowed out onto the grounds.

Shawn Youngman is the third generation on his family’s 175-head beef cattle operation in Butler, New York. His family has worked with Wayne County Soil and Water District to ensure Youngman Farms doesn’t allow manure and runoff to pollute Wolcott Creek, which runs through the farm and into Lake Ontario. But Youngman said that he is concerned for the creek because of Butler Composting Facility, a proposed 30-acre human waste treatment facility in a nearby quarry.

Youngman grew up on the farm and played in Wolcott Creek, as do his children. He said that if his children want to farm someday, he hopes to pass the land to them. But he fears that the proposed facility could make living here much less desirable because of the sludge’s odor and also make farming here much more difficult if the facility pollutes the creek, which runs near the proposed site. His cows drink from the waterway.

He also fears contamination of ground water since the quarry already has a much lower level than the ground around it. Wells supply water to many of the 1,809 people who call Butler home.

“We’re certainly not too keen on it,” he said. “We’re just downstream from where it would be.”

Riccelli-Northern, headquartered in Fulton, New York, is owner of the proposed site. Tully Environmental of Flushing, New York, is proposing the project that would treat human sewage waste on the site and distribute it as agricultural fertilizer.

“The air quality is horrible for miles,” he said. “The horrid odor took my wife’s breath away. You could smell it for about 3 or 4 miles away. This would affect a large area.”

Wolcott is about 2 miles from the site. The village is home to 1,611 residents and several churches, stores and many other businesses, plus North Rose-Wolcott High School. Mettler has lived in Butler many years and his home is very close to the proposed site.

“The villages and towns here have spent millions to protect the watershed,” he said. “The town board doesn’t realize the scope of this. What Tully proposes, no place in the Northeast can handle it.”

He said that a resident of Tremont told him that he had used treated biosolids from Tully for fertilizing corn he raised for ethanol, but he had to stop using it because he found needles in the product. The man also believes that heavy metals from the Tremont facility polluted the local watershed. Mettler fears the same could happen in Butler.

Mettler added that the project would result in about 10 tractor-trailer loads of sludge hauled daily from New York City — about 300 to 350 tons per day, plus wood chips added.

The trip is 600 miles round-trip, a north/south route through the rural upstate New York regions of the Finger Lakes and Southern Tier and also part of Northeast Pennsylvania.

Mettler said that the proposed asphalt and concrete structures for the facility would eventually crack.

“We’re not looking forward to this if it goes in,” Youngman said. “The lack of zoning is one reason why they wanted to do it here. We’re not in favor of it.”

Youngman views farmers as stewards of the land and expressed concern about the potential for spills and leaks.

“The base is gravel and limestone, so any runoff would drain off into the water table,” he said.

In addition to Youngman’s, others operate close to the proposed site. Merrell Farms, a dairy, has its calf hutches a mere 100 feet from the edge of the quarry. The third-generation farm milks close to 3,000 cows.

Wayne Williamson has lived in the rural community his entire life. His home is about 1.5 miles from the proposed site. He and his wife, Andrea, work in production at a nearby farm. Andrea also instructs at a local martial arts school, Kuk Sool Won of Wolcott. The couple feels close ties to their community.

“I feel that the sewage treatment facility does not fit into our community due to being so close to an existing farm where the strong odors and possible leakage can cause health issues to the animals and the community,” Williamson said.

As with many others in the community, Williamson expressed concern about the site’s close proximity to Wolcott Creek.

“Toxins and pharmaceuticals can leak into the waterways and can contaminate the wells, of which most local residents receive their source of drinking water and the natural streams that local wildlife drink from.”

His wife Andrea Williamson added that “it is strongly opposed by the majority of the community.”

State Assemblyman Brian Manktelow (R-130 of Lyons) stated in a press release that the proposal would have to undergo a review by the town engineer and its legal counsel, receive a permit from the town, and undergo a detailed review by the New York Department of Environmental Conservation.

“It is very important for those who are concerned about this proposal to stay informed, and to voice their thoughts about this to Butler Town officials,” Manktelow stated in the release.

“It is imperative that Butler residents continue to follow every step of the process regarding the Butler Composting Facility to continue to express opposition to it and to ask pertinent questions,” she said. “The potential for human error is far too great to take a risk like this. While the town board members seem to be relying on DEC regulations to protect us, outside research is indicating that regulations and available funding may fall extremely short in regards to tracking and testing for the number of ‘forever chemicals’ that will be part of this sludge process. We need to be proactive to ensure that our community does not fall prey to a million-dollar corporation.”

The first communitywide meeting in Butler about the proposal was held March 9 as part of the regular Town Board meeting. Andrea Williamson said that so many members of the community attended that only about one-quarter of those in attendance could fit in the Butler Town Hall, including the Williamsons. Andrea added that a police officer stood at the door to ensure that no one else crowded into the building since the size of the crowd exceeded the number permitted by fire code regulations.

The rest of the attendees spilled out onto the grounds, many holding signs and wearing buttons stating their objection to the proposal.

“While we were milling around outside, we met people from all over — Ontario, Marion, Clyde and more — who were discussing how it doesn’t just affect our town,” Andrea Williamson said. “It affects all of upstate New York.”

While she felt pleased to see so many local and extended community members showed up at the meeting, Andrea felt disappointed that so few were admitted to the Butler Town Hall for the sake of space.

“I feel that they should have the meeting at a bigger facility where people like me, who are directly affected and living only 1.2 miles from the proposed site, can be seen and heard,” she said, “and so that I can also hear firsthand what is being discussed.”

Mettler said that instead of detailing the project, representatives of Tully focused more on the potential benefits their firm’s presence could bring to the rural community. Tully Environmental refuses to give interviews to any members of the media about proposals.

Facebook pages of groups objecting to the proposal include Sludge-Free Upstate and Butler and Beyond for Sludge-Free Backyards.