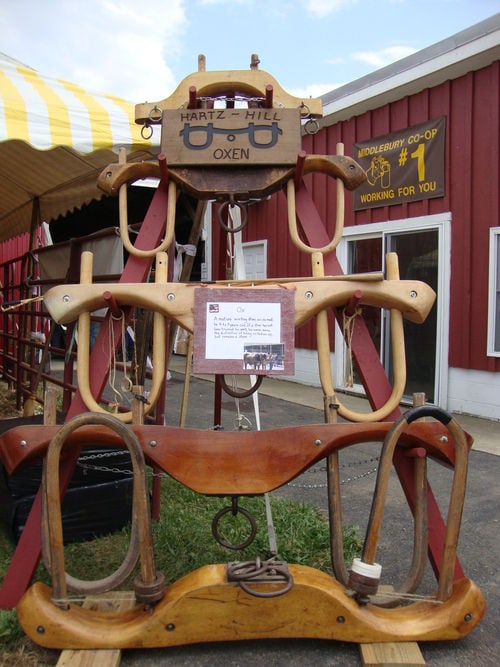 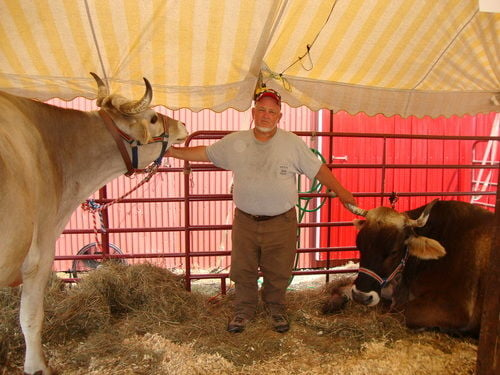 They called them “poor man’s power” back in the 1800s when oxen’s economical nature enabled them to play an important role in literally leading the United States’ expansion westward to millions of fertile, unclaimed acres.

In fact, the word “acre” itself was once defined as the area that one pair of oxen hooked to a single-beam walking plow could till on the longest day of the year.

Oxen were a bargain among draft animals then —and they still are, given their relatively low initial cost, the ability to work long hours, inexpensive equipment and a lengthy lifespan. That’s why it should be no surprise that the most-used draft animal in the world in 2011 remains the ox.

Everyone’s heard the phrase, “as strong as an ox”, but few are familiar with the animal that goes by this name.

An ox is actually nothing more than a specially trained dairy or beef steer that has reached the age of 5. Depending on age, sex and breed, these beasts can weigh 1,500 to 3,000 pounds and pull an amount equal to or greater than their own weight.

Lest you think oxen are “has-beens” in the modern era of heavy equipment, Ralph Hartzell of East Nassau, N.Y., begs to differ. Hartzell, a retired New York state employee, and his wife, Judy, a teacher’s aide, acquired their first pair of oxen more than 30 years ago shortly after building a home on their 40-acre spread, known as Hartz-Hill Farm.

At the time, they had a wood-burning stove installed and needed a way to drag logs out of the nearby forest to cut into firewood. As former equestrians, they first considered draft horses, but found them too pricey at more than $1,500 apiece.

After seeing oxen in action at the Eastern States Exposition in Springfield, Mass., their problem was solved. The Hartzells were able to acquire a pair of dairy bull calves at about $100 each, castrate them and train these steers to become oxen.

Since then, they’ve owned about 15 pairs of steers, though only about four of those pairs — with names like Bert and Ernie or Rough and Ready —succeeded in becoming full-fledged oxen.

These days, Ralph and Judy have only one pair —2,600-pound Brooks and 2,200-pound Dunn — though Hartzell says he’s put the word out that he’s looking for a new pair of calves to start working with this winter.

He favors Brown Swiss steers for turning into oxen, though he’s used Holsteins, as well.

Hartzell points out that dairy breeds make the best oxen because, unlike beef steers, dairy cattle convert their feed into growth rather than meatiness, and “you need good long legs to get lift.”

Horns are also considered a necessity for oxen, and the dairy breeds have those, as well.

While an auction barn might seem like the best place to shop for suitable oxen material, Hartzell shuns that approach. He prefers to get his calves right from the farm, selecting them when they’re about 3 days old and then leaving them with the farmer to raise until they reach the age of 1 month.

At that point, he brings the young steers to his farm and begins observing them as they grow. Not all the calves he chooses will ultimately become oxen.

He starts working them as soon as they arrive at Hartz-Hill, teaching them by leading them singly, then in pairs before fitting them with a small calf yoke. After about 6 to 12 months, they’ll be broken to “gee” (turn right) and “haw” (turn left), and from then on, repetition in twice-daily trainings will develop the skills and reliability needed to become oxen.

Initially, there will be “nice short lessons” of 15 minutes to half an hour each, Hartzell said. However, as the animals progress, he will lengthen the sessions, being careful not to bore his steer students.

As the training continues, a young steer will progress through several stages of proficiency, including “clever steer,” “handy steer” and “working steer” before earning designation as ox.

Along the way, some calves will become “drop-outs” and fail to achieve status as oxen.

Hartzell knows from experience that some of the pairs will grow apart, the growth rates of others will differ too widely and some simply won’t be compatible with humans.

For that reason, he usually buys 6 to 8 calves to come up with the optimal pair. Hartzell said he isn’t as worried about matching his teams in color, so much as in size.

Younger animals can be substituted for each other during the training process, but if an older pair has to go their separate ways due to injury or behavioral issues, Hartzell won’t attempt a new pairing.

A Brown Swiss ox typically enjoys a lifespan of 15 to 20 years, depending on the condition of his feet and legs, as well as his diet — generally pasture grazing in the summer and a combination of hay and grain during the winter.

The terminology for working oxen is similar to that used with horses and mules. The one closest to the driver on the right side is known as the “nigh ox,” while the one to the left is called the “off ox.”

The larger ox is placed on the off side so the driver can see him, as this is also the ox that will be guided along the furrow.

Meanwhile, the nigh ox should be the more attentive and reliable of the two, as he’s the one who needs to pick up on commands more quickly and initiate the proper response.

A watchful trainer like Hartzell can tell which ox should assume which position when working with the pair.

The oxen are held together not with a harness, but by a wooden yoke consisting of two main components.

The yoke itself rides on top of each ox’s neck in front of his shoulders. It is made of such woods as cherry, curly maple, elm or yellow birch.

Two bows go around the animals’ necks and are held fast to the yoke by “bow keys.” Bows are made of strong but more pliable woods such as hickory, ash or white oak.

Properly maintained yokes can last virtually forever if they are coated with a waterproof finish and the bows are kept oiled and positioned in the yoke.

While antique yokes are quite pricey, Hartzell’s yokes are made by a friend and can range in price from about $150 for a small calf-training yoke up to about $400 for a yoke designed to accommodate full-size oxen.

A chain is attached through a ring on the yoke to facilitate pulling a load.

Several organizations throughout the nation, such as the New England Ox Teamsters Association, sponsor shows and pulling competitions.

Although Hartzell and his Hartz-Hill teams once competed in pulling events, which are especially popular in New England, these days Ralph and Judy use their oxen mostly for pulling around their farm and take their teams on the road to a variety of venues during the summer months, including five fairs like the Tioga County Fair in north-central Pennsylvania and two or three festivals, mostly in Pennsylvania, though they have displayed their animals as far away as Quebec, Canada.

With the primary goal of educating the public, they also make appearances at schools and agricultural expositions.

Part of the Hartzell’s informative presentations include highlighting the role played by oxen in American history. When Americans heading west arrived at portal cities like St. Louis with their horse-drawn covered wagons, they were advised by the wagon masters to trade their horses in for more practical oxen.

Not only could oxen out-pull horses when it came to drawing a wagon, but the oxen were also able to thrive on poorer grass and brush instead of relying on the scarce and expensive grain required by horses.

Oxen were superior at moving through mud and snow because they were actually able to “swim” through these impediments. One final practicality was that, if an ox fell and broke a leg, it could still be butchered and used to provide meat on the journey.

After the great western migration, came the need to transport freight back and forth between the east and west coasts. At one time, between 200,000 and 300,000 teams of oxen were used as draft animals to accomplish this mission.

Meanwhile, although oxen had proved to be perfect for cultivating the small 10- to 15-acre farms in New England and thrived there for that reason, farmers breaking sod out west with its vast acreages and shorter growing season, phased out the use of oxen for faster paced horseflesh.

The Hartzells of Hartz-Hill Farm are dedicated to showing the public their oxen not only to teach the history of these animals, but also to show how farmers value their animals and have every incentive to take good care of them and use them in ways that are not cruel or abusive, but rather assure their ongoing value.