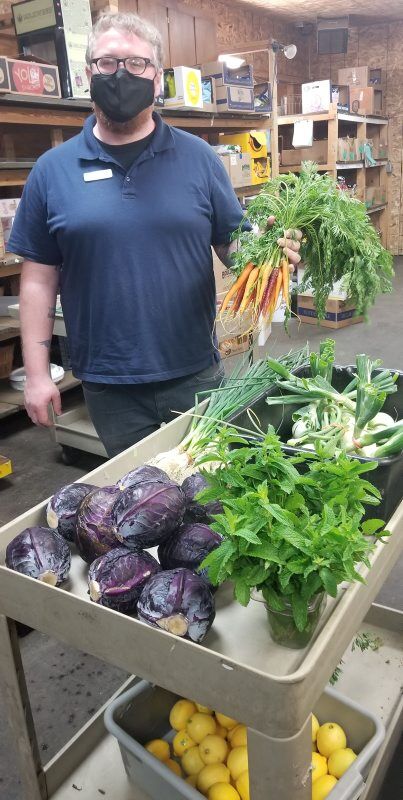 Rutland Area Food Co-op General Manager TJ Allen displays some of the fresh produce the non-profit firm gets from local growers. The co-op has been an extremely important outlet for many Vermont farms as they’ve struggled to keep maintain sales during the COVID-19 pandemic.

RUTLAND, Vt. — Rutland Area Food Co-op has “hyper-localized” efforts to secure fresh fruit, vegetables and meat during the COVID-19 pandemic, giving central Vermont farmers something to be truly grateful for this holiday season.

The non-profit firm’s presence is especially critical from November to May, when other retail opportunities aren’t available to growers.

Paul Horton of Foggy Meadow Produce, in Benson, said the co-op accounts for about 10% of his summer sales, but twice that during the long winter months.

“I have two large greenhouses with radiant ground heat, so I do lots of leafy greens year round,” he said. “And I’ve got about 20,000-25,000 pounds of roots in storage right now — beats, carrots, turnips, parsnips, onions and radishes. We draw those out each week. The co-op is loyal to its vendors, they stick with you. I know I can count on them for an order each week, every week of the year, so it’s really good for us.”

How Vermont-based Rutland Area Food Co-op Got Their Start

Located at 77 Wales St. in downtown Rutland, the co-op was founded in 1995 with a stated mission of providing an all-inclusive place for people to gather, educate and have access to affordable, minimally processed healthy foods.

A quarter century later, it has annual sales of more than $2.1 million, 18 employees and is owned by approximately 2,000 members who pay a minimum $10 per year or $200 for lifetime memberships. Non-members are welcome to shop at the co-op, but membership gives people a chance to vote on major decisions during an annual meeting.

General Manager T.J. Allen said the co-op has done surprisingly well during the pandemic, maintaining about 90% of normal sales, which he attributes to people paying a lot more attention to where their food comes from during the health crisis.

“We always rely heavily on Vermont farmers for most of our produce,” he said. “But we’re even more focused now on trying to stay as Vermont-centered as possible. We have a vendor that carries some of the best Vermont-based condiments we can find. Another vendor carries a great range of ready-to-eat foods. We could get everything from a national supplier like United Foods International, but instead we kind of piecemeal multiple Vermont vendors and keep as much of that business in-state as we can.”

Thanksgiving and Christmas are among the co-op’s busiest times of year, giving many farms a much-needed boost after the growing season has ended. For Thanksgiving, the co-op placed more than 100 orders for turkeys from Misty Knoll and Stonewood Farms in New Haven and Orwell, respectively.

“From our end as the retailer, anything we’ve asked for, such as larger supplies, different delivery days, or making sure things are packaged properly, they’ve all been quick to amend what they do in order to get food to their customers,” Allen said. “That’s been a big help to us. It make it easier for us to take the steps our customers need.”

In turn, the co-op has taken extra measures to help out by becoming a CSA pickup point for a number of local farms. This gives people another reason to visit the co-op store and purchase non-food items as well.

Heading into 2021, Allen is doing everything possible to make sure the co-op isn’t caught off guard with a shortage of supplies, as happened early last spring when the pandemic began.

“A few weeks ago we started stockpiling paper products and beans, things we had a hard time sourcing in March and April,” he said. “Unfortunately, it’s something we’re well versed on at this point. I think we’ll survive without the same sort of manic, reactionary actions we had to take before. And we’re going to continue to be as flexible as possible and work with our local farmers in whatever issues they may encounter. We have a responsibility to our suppliers and growers to help them through this.”

Vendors there must operate within a 50-square-foot space, with extra distance in between for health reasons.

“We’re making sure we do everything to keep people safe,” Horton said.

Many farmers market organizations suffered this year because they couldn’t allow as many vendors as in years past, but for vendors who did participate sales were quite strong, Horton said.

Like Allen, he attributes this to increased interest in anything locally grown.

Having survived one year in business during the pandemic, Horton offered a helpful suggestion to farmers faced with the uncertainty surrounding COVID-19 in the weeks and months to come.

“My advice to any producer is to get customer lists, get your customer contact information,” he said. “So if we lose the ability to be at a venue, whether inside or outside, you can still have direct communication with the customer. I think that’s a very big deal.”

Hoffman Teaches Wreath-Making for the Holidays

Kristin Hoffman has been teaching wreath-making classes in her community for 13 years, and she loves to see people get exactly what they want.