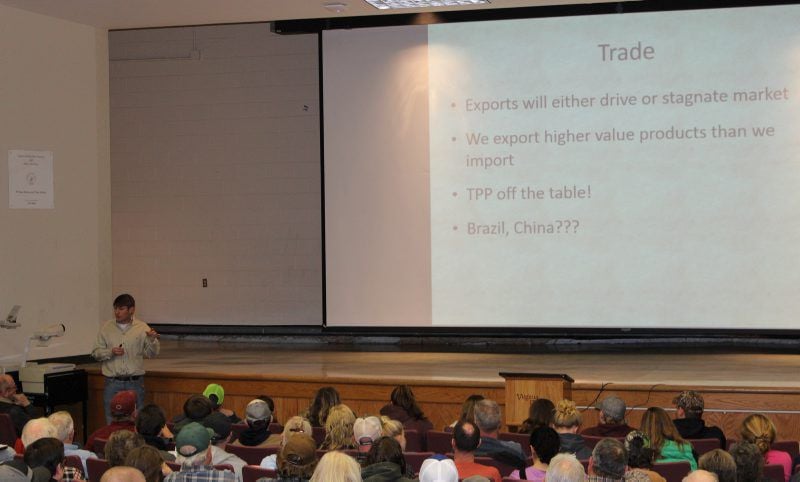 Andrew Griffith, a livestock economist at University of Tennessee, talked about the 2017 cattle market at the recent Beef Cattle Health Conference in Blacksburg, Virginia. 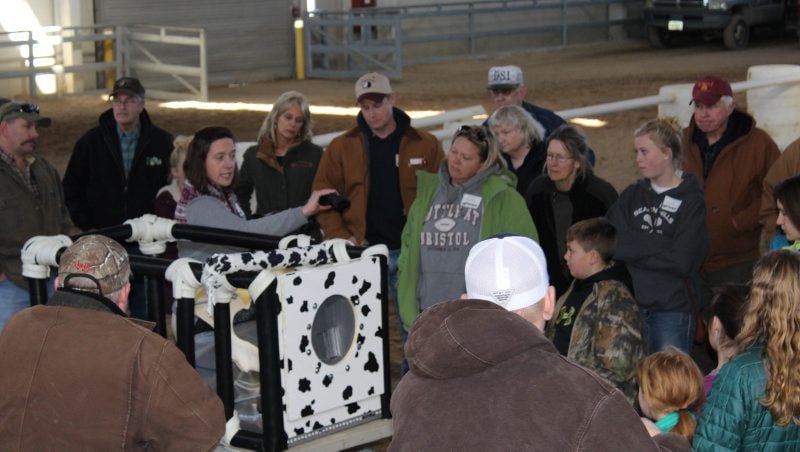 Sherrie Clark used a model cow uterus to explain the correct way to birth a calf at the Beef Cattle Health Conference Blacksburg.

Andrew Griffith, a livestock economist at University of Tennessee, talked about the 2017 cattle market at the recent Beef Cattle Health Conference in Blacksburg, Virginia.

Sherrie Clark used a model cow uterus to explain the correct way to birth a calf at the Beef Cattle Health Conference Blacksburg.

That’s according to Andrew Griffith, a livestock economist from the University of Tennessee, who talked to attendees of the recent Beef Cattle Health Conference in Blacksburg.

“Exports are going to be key to supporting our prices. I think the key to profitability the next several years is going to be marketing and cost management,” Griffith said.

Griffith said prices stayed low until the last half of 2013 when the drought eased and the corn crop was plentiful.

That caused cattle prices to rise, “which is very unseasonable.” The trend continued in 2014, so cattle producers grew their herds.

“Normally what we see on these lightweight calves, their prices peak in the spring when grass is abundant and when we don’t have a lot of calves. They are generally at their lowest point in the fall when we don’t have grass and everybody’s trying to sell calves,” he said.

He said if farmers wean their calves early, they can get more for their cattle.

“We have management practices where we can early wean calves, get rid of those cows. Wean them at five months,” he said. Instead, many farmers wait until October or November to sell their cows, “and when you’re losing $20 a hundred on a 1,200- or 1,300-pound cow, that’s a lot of dollars.”

He said heifer, steer and beef slaughter numbers were all down in 2014 and 2015 but picked up steam last year. Pork and poultry production were also up.

Griffith said that if beef prices stay high and the price for other meats goes down, consumers will turn from beef to those other meats; they’ll find an alternate protein source.

“When you have competing meats that continue to produce more, that’s going to put more pressure on beef prices,” he said.

Griffiths predicts calf prices will be lower this year due to pressure from lower pork and poultry prices.

He said prices will continue to decline this year but at a slower rate than last fall. He said exports are picking up from 2015 when the value of the dollar was high, which hurt exports. He thinks exports will remain strong this year because Australia is rebuilding their herds after drought.

Charlie Hall is a cow-calf producer from Catawba who attended the conference. He said he’s optimistic about prices and said the outlook “looks better than it has been. Expenses are probably going to be on the plus side but they’re going to maintain for a while.”

Billy Mac Halsey from Grayson County is also a beef producer. He said he’s planning to change his breeding operation because of the outlook.

“Try to breed now and have calves in the fall because we’ve been calving in the spring, and try to make a profit that way,” he said.

Beverly Amsler is a freelance writer in southwest Virginia.