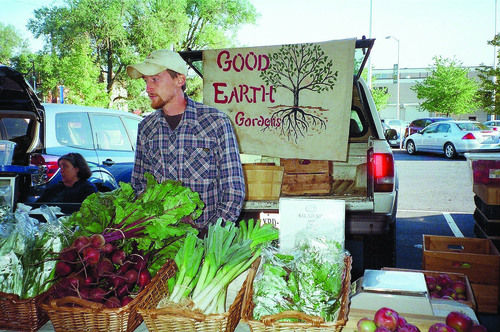 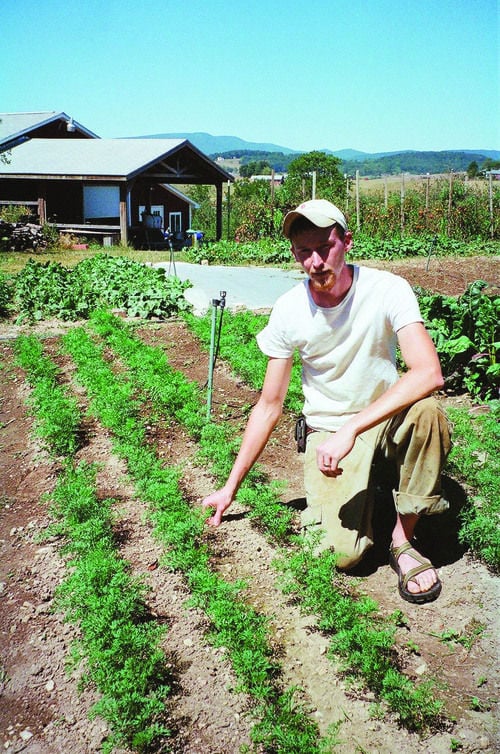 HARRISONBURG, Va. — Having a little soil to manage, even if it’s rented, can reap big dividends for a SPIN farmer like Nate Clark, a man who lives in the city.

SPIN is an acronym for Small Plot Intensive Farming. It is a system of cash crop farming whereby a number of small plots of land are rented for the purpose of growing things that mature very rapidly, and can reach the market quickly.

I’m really happy with the system, said Clark, who connects with fellow SPIN farmers listed at www.spinfarming.com. That’s where SPIN farmers, especially in the United States and Canada, can communicate with one another. They ask questions, they find answers and generally compare experiences.

It’s (SPIN farming) designed with a market as well, so it’s really about how to make a living. I can use people’s land to grow and try to make a living and bring fresh local food to the farmers market and to local people, says Clark.

Beets and carrots, for instance, grow fast but don’t need much area to grow in.

It’s what you can do in a small space for a good profit.

Clark began SPIN farming three years ago. In his background was a degree in environmental science from Goshen College in Indiana, his internship and related work experiences that incorporated his training and education, but which failed to satisfy his deeper desire to work outside, in harmony with nature. Reading and research lead him to choose SPIN farming and the compatible lifestyle it offered.

What he learned convinced Clark that sowing crops that grow fast in a small space is a great advantage, and moreover, more lucrative than farming a large space.

What is so great about a SPIN farming plan is you don’t have a big investment like equipment and big tractors. When I started out, I was given a tiller. That is used for prepping the plot. Then I slowly started acquiring and borrowing hand tools. I’ve had hardly any investment at all, Clark said.

The exception was seeds, but even as a credit card purchase, Clark soon paid off the order.

He has since realized SPIN farming has promoted his own health and sense of well-being.

This is great therapy for stress, Clark says. When you farm you sleep really well. I used to have trouble sleeping, but just starting to farm and work very hard you sleep very well.

SPIN farming is designed for urban farmers. People in town might rent 10 or 12 backyards and end up with a half-acre to cultivate for SPIN, he said. According to the website mentioned earlier, urban growing provides a more controlled environment with fewer pests, better wind protection and a longer growing season.

Clark’s SPIN farming plots, however, are outside city limits, yet in easy proximity to the Turner Pavilion (the marketplace), along South Liberty Street, open from 7 a.m. to 1 p.m. Tuesdays and Saturdays.

Keeping soil fertility high is essential in SPIN farming. Fall is when Clark mixes compost with manure from an organic dairy, rock phosphate, green sand and a number of other organic materials — perhaps, coffee grounds for nitrogen and wood ash. Then he applies the compost in the spring and as needed during the growing season. Clark said green sand is mined in the ocean. Among its properties, green sand contains micro-nutrients that are released slowly when added to the soil and help loosen it.

SPIN crops grow so fast that it’s essential to rotate them for pest control. When the soil is turned over, Clark doesn’t place the same family in the same bed, but will grow three or four different crops in the same area.

Between seedings, Clark plants buckwheat as a cover crop, then tills it over. In the off season, however, he chooses oats, vetch and a type of radish with a deep tap root for cover crops.

Moisture and watering are crucial to germinate SPIN crops. Clark uses several methods of watering, including irrigation, hand watering and a sprinkler system, depending on the water source.

SPIN farming is very intense work for the Good Earth Gardens owner. He is on the job at least 10 hours a day in the growing season, plus the hours he spends at the market. The reward of knowing his produce is at the peak of freshness and nutritional value when consumers buy it, makes every moment worth the effort. He is more and more compatible with SPIN farming, seeing how profitable it is in every way.

The drought has been the only downside this summer of 2010.

This season is a little rough, he said, because it’s been really, really dry. I’ve noticed the plants have been more stressed.

For the fall season, Clark will have kale, carrots, radishes, Swiss chard, lettuces and beets. Swiss chard, he says, is in the beet family and has a showy red stalk. It’s a good substitute for spinach. Unlike spinach, it can grow in the hotter months.

Part-time helpers assist Clark by washing and prepping the vegetables on the day before the farmers market.

Clark’s largest SPIN plot is rented from Ann Marie Leonard, another member of the farmers market family. The small plot that Clark rents is nearly surrounded by Leonard’s apple orchard of 30 varieties.

He is learning how to maintain the apple trees and helps to prune them during the off season. He is also working to build up the orchard soils with nurturing wood chips and compost so the orchard can be Certified Naturally Grown, as is his own Good Earth Gardens.

Some of the apples Clark takes to the market and he makes cider that isn’t for the market.

In addition to SPIN, Clark started a CSA (community-supported agriculture) to market potatoes, tomatoes, green beans, peppers and so forth, this year. He rents a 50-by-30-foot plot in the city for these crops, which take longer to grow.

Wintertime may not demand as much physically from the SPIN farmer, but he’s still busy. Clark uses the time to recruit new CSA members and to plan for the next growing season, after reviewing and analyzing the 2010 data. He will make seed and supply decisions and place orders.

Clark’s wife, Kate Clark, is a nurse currently enrolled in graduate school for public health nursing. They have no children.