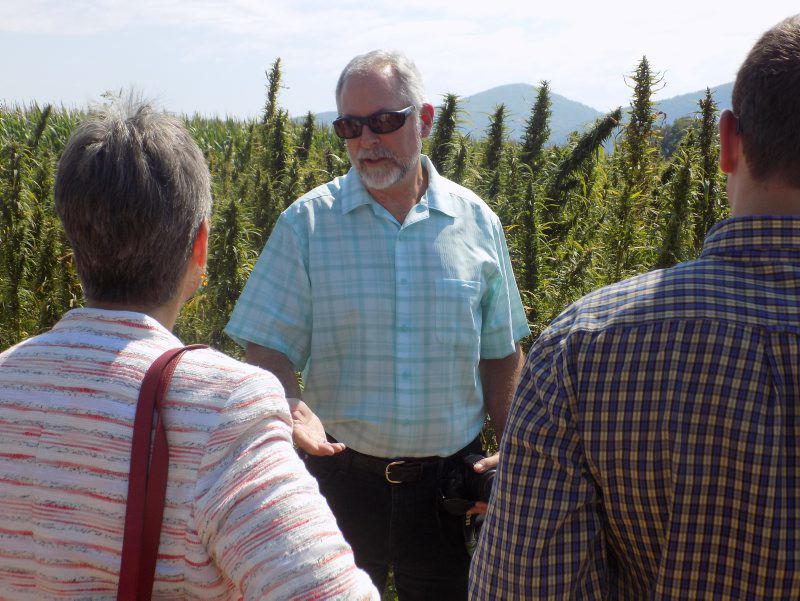 Michael Renfroe, a James Madison University biology professor, talks with attendees in front of a hemp plot during a September 2016 hemp field day at Riverhill Farms in Port Republic, Virginia. 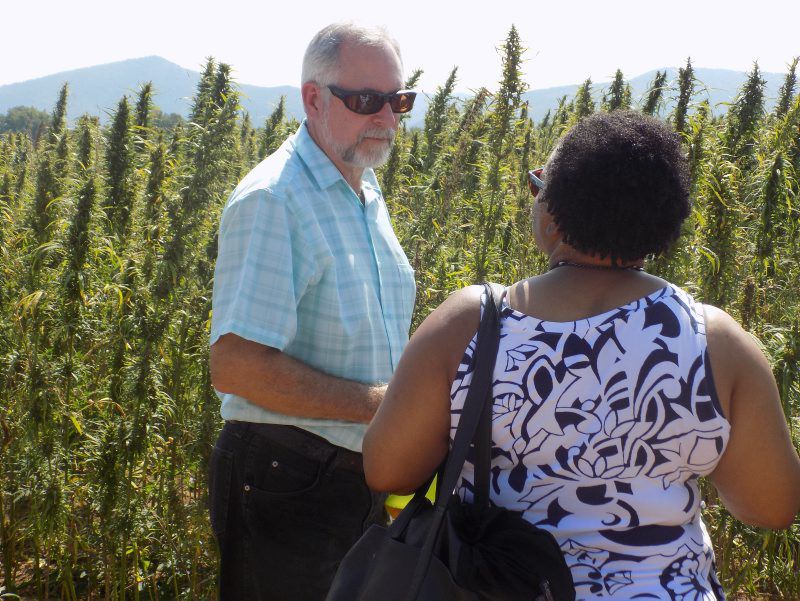 Michael Renfroe, a biology professor at James Madison University, speaks with Yvonne Harris, the JMU's vice provost for research and scholarship, on Sept. 8, 2016, during a field day for the university's industrial hemp research project at Riverhill Farms in Port Republic. 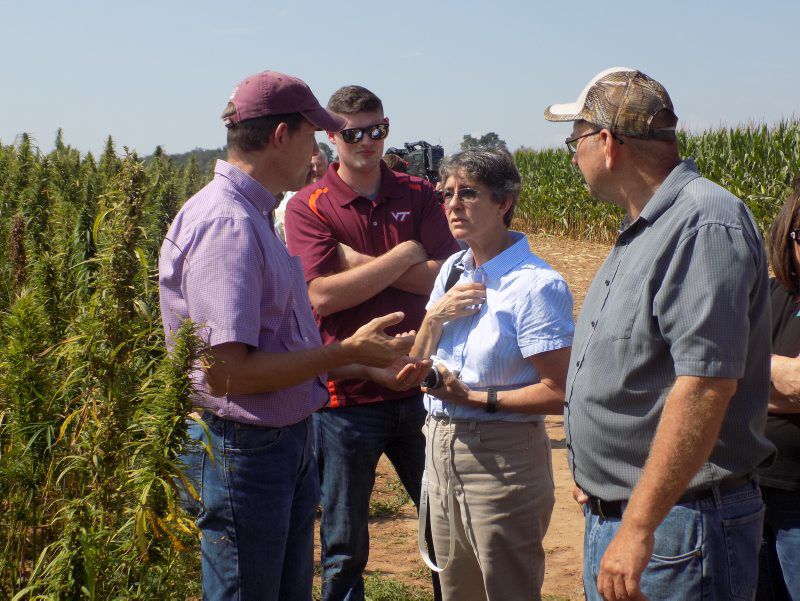 Michael Renfroe, a James Madison University biology professor, talks with attendees in front of a hemp plot during a September 2016 hemp field day at Riverhill Farms in Port Republic, Virginia.

Michael Renfroe, a biology professor at James Madison University, speaks with Yvonne Harris, the JMU's vice provost for research and scholarship, on Sept. 8, 2016, during a field day for the university's industrial hemp research project at Riverhill Farms in Port Republic.

HARRISONBURG, Va. — A university in the heart of Virginia’s major agriculture region plans to be ready to help farmers if hemp growing becomes legal in the Old Dominion.

James Madison University is upping the ante in its industrial hemp studies this year, hiring a research director and recruiting 11 farms in eight counties as partners.

The Harrisonburg school does not have an agriculture program, so its biology department is spearheading the effort.

“It’s an emerging crop, and we feel that we’re strategically poised to be able to take advantage of the research opportunities available here,” said Michael Renfroe, the biology professor who’s been part of the hemp program since it was launched after the 2015 growing season.

“Because we’re strategically partnering with the public, doing it as an outreach activity, we can get the quickest turnaround, the quickest results in terms of what’s useful to the farmers.

“We’re the only (Virginia) university that went straight to production-level research. By next fall, we should be well positioned to have information that’s going to be useful to Virginia farmers,” he added.

Hemp fiber and extracts can be used for therapeutic purposes, rope, paper, oils, food products and biodiesel, among other products.

The university’s initial foray into hemp came in 2016 when one farm in Rockingham County and another in Albemarle County grew and harvested the crop.

In 2017, another Albemarle farm and one in Fluvanna County joined the project.

This year, Renfroe said two farms each in Albemarle, Middlesex and Rockingham counties, and one each in Augusta, Fluvanna, Loudoun, Louisa and Stafford will be used in the study.

Four seed and fiber cultivars will be planted on a total of about 90 acres.

The university has hired Shelly Thomas to oversee the project as its farm manager.

Thomas has experience in agriculture, forestry and biology research in both the United States and abroad, and she is developing research plans for this growing season.

The position was created, Renfroe said, to make sure the university has “enough boots on the ground” to provide the support its farming partners need.

Because producers are growing the crop for research, they’ll have to follow planting and data-collection protocols that wouldn’t normally apply.

“We want to make sure they have whatever advice they need when they’re planting, cultivating, harvesting and processing,” he said.

By having a farm manager to help with the project, Renfroe said the university can better assist farmers with successful hemp growth.

Hemp has a long history in Virginia. Some of the Founding Fathers from Virginia grew the plant.

In 1970, the U.S. Drug Enforcement Administration placed the plant on the list of Schedule I controlled substances that are illegal to produce commercially because they supposedly have no medical value and a high potential for abuse.

Industrial hemp comes from the same plant species as marijuana but contains too little of the chemical tetrahydrocannabinol to get people high.

The Industrial Hemp Farming Act of 2017, a bipartisan effort to delist the plant, has been sitting in the U.S. House of Representative’s Crime, Terrorism, Homeland Security and Investigations subcommittee since Sept. 6.

“There are markets for hemp seed for human food,” Renfroe said. “The difficulty there is issues with the interstate transport of materials.

“We really need that federal bill that would delist hemp as a controlled substance to pass Congress this year. It’ll open up a lot of opportunities for hemp.”

Goodlatte, who attended a hemp field day at a Rockingham County farm last year, has signed on as a co-sponsor of the bill, and Renfroe said he’s confused about why it’s still sitting in subcommittee.

“The bill has bipartisan support and should be an easy legislative win,” he said. “Bob Goodlatte says he’s an advocate for hemp. We’d appreciate his support in helping get it out of committee.”

Virginia Tech and Virginia State University did research on their own farms in 2016 and 2017. The University of Virginia entered into an agreement with a private-sector partner to grow the plant last year.

“With what we learn this year, we should be in pretty good shape as far as how to select an appropriate site and match it to a particular cultivar,” he said.

“We have a variety of soil types we’re looking at,” he said, “and we’d like to go further south and find some farms that are suitable for a research partnership.”

Those interested should contact the university early because importing the seed is subject to a complex regulatory process.

The university must place its order in late October or early November so they can acquire the appropriate permits and get the seed through customs.

“We have to know early on who we’re going to be working with for a full growing season,” he said.

Both houses of the Virginia General Assembly approved legislation this year that replaces a lengthy licensing requirement for those growing the plant with a registration system within the Virginia Department of Agriculture and Consumer Services.

No one in either house voted against the bill, which is now law and goes into effect July 1.

Renfroe said farmers should strongly consider partnering with the university rather than growing industrial hemp on their own.

Being part of the project allows for the university to take care of the cumbersome seed-ordering process and gives a producer access to research data on how and when to plant the seed, and what can be done with the crop.

“We’re trying to get the word out about our program,” he said, “and letting people know that we’re interested in working with other folks.”

Vic Bradshaw is a freelance writer in Virginia’s Shenandoah Valley. He can be reached at vic.writes@yahoo.com.