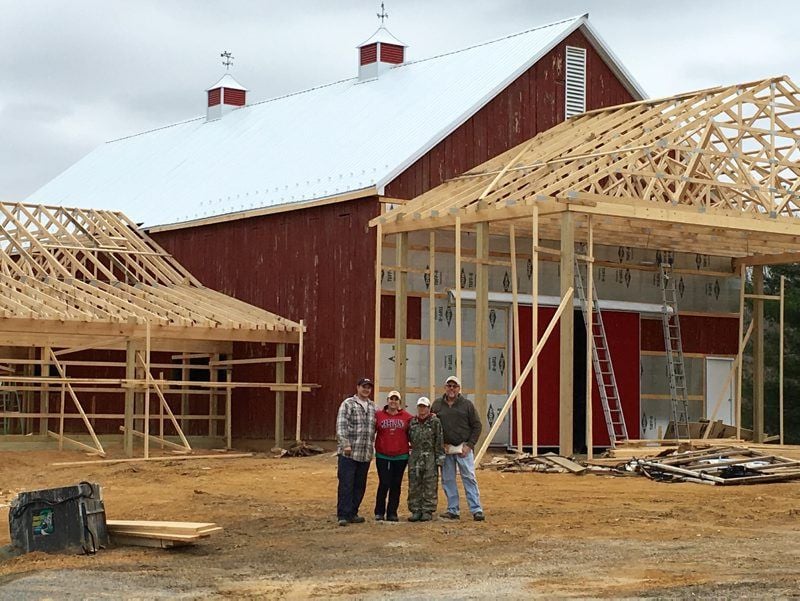 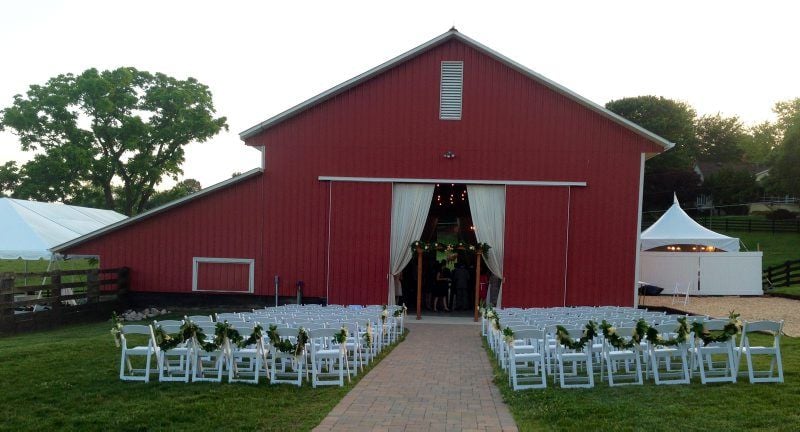 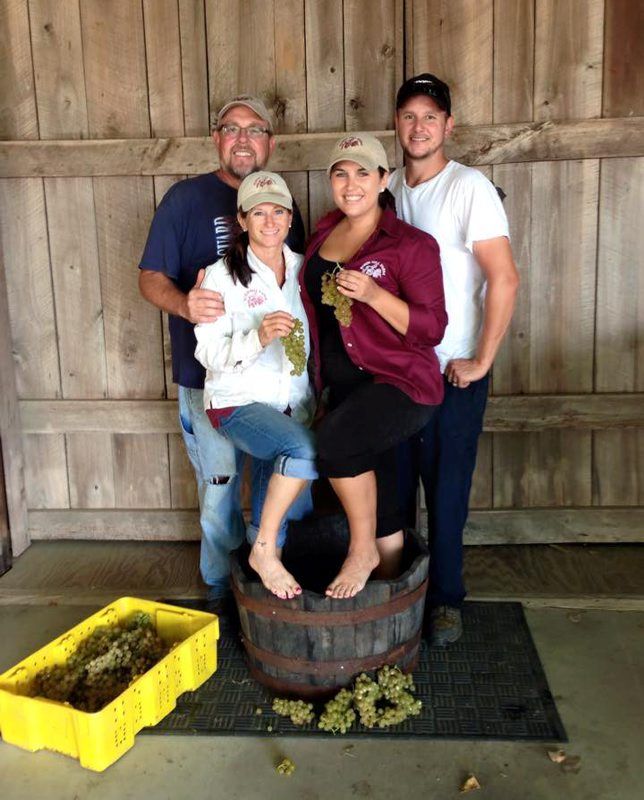 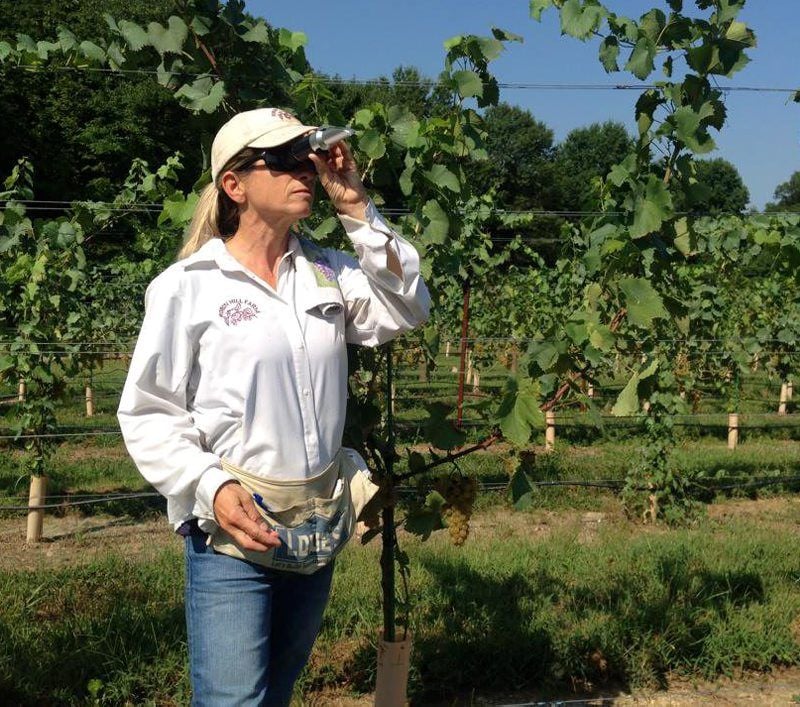 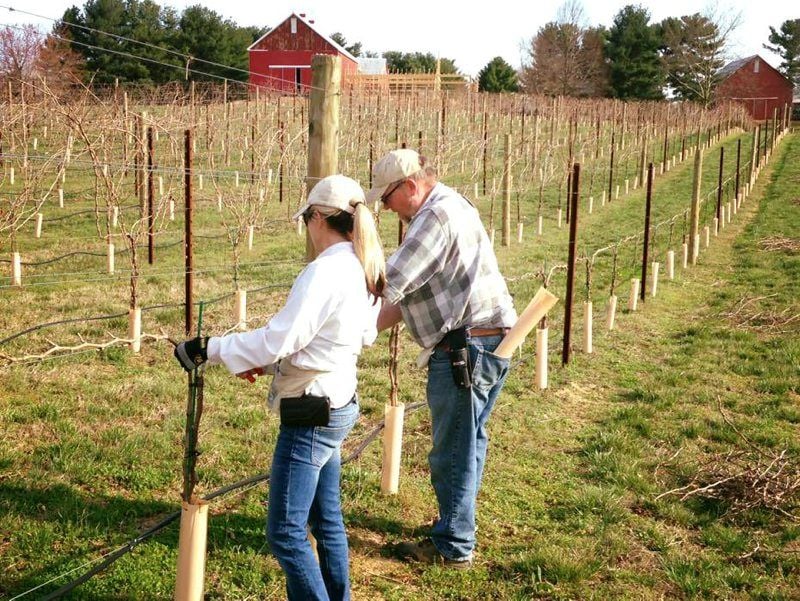 BRANDYWINE, Md. — While Robin Hill Farm and Vineyards in Croom, Md., began as a tobacco farm, the rolling hills and well-drained soils of southern Prince George’s County have made it easier for the Watson family to transition to wine grapes.

The farm is about 11 miles south of Route 301 in an area of the county called the “rural tier” by planning officials.

In 1954, Russel and Shirley Watson purchased the family farm. They married in 1955, according to Susan Watson Hardy. She is one of the couple’s four children — two boys and two girls — who were raised on the farm.

For the first 20 years, tobacco was the farm’s primary cash crop. In 1958, to supplement the farm’s income, Russell Watson, who had a fondness for pigs, added hog farming to the operation. By 1960, the farm had about 400 pigs.

In 1969, the farm became a nursery, and in 1970 a fall festival and pumpkin patch were started, Watson Hardy said. Thousands of visitors came to the farm each year for the festival. The nursery also flourished.

By 1975, tobacco was no longer the cash crop on the farm. In 1984, the hog operation was discontinued. The farm’s last fall festival was held in 2010.

Watson Hardy, who is now the owner of the 70-acre farm, said her father’s death in 2005 was a devastating blow to the family. Her mother, now 79, remains active and still works on the farm.

Watson Hardy said she worked closely with her father on the farm. Upon his unexpected death, Watson Hardy and her mother decided to continue the nursery.

Watson Hardy said she loves the farm and was determined to keep it in agriculture. It is surrounded by other farms that are being protected from development.

But for the farm to survive, Watson Hardy said they had to diversify away from the nursery business.

For a few years while the family pondered the direction the operation should take to be profitable, they kept livestock and planted corn, hay and soybeans. In the latter part of 2012, Watson Hardy’s niece, Shelby, and Shelby’s husband, Wade, researched different ways to preserve the farm.

“We went to the county Extension, to different workshops, trying to figure out what would be a good diversification for the business,” Watson Hardy said. “At the time, vineyards and wineries were popping up quite a bit in Maryland and the wedding barn trend was hot, so we decided to go into that in order to keep the farm in business and bring in some income. 2013 was the year of new beginnings.”

When the Maryland Tobacco Buyout began in 2000, the farm still had a small tobacco operation, she said. In fact, the farm got a grant from the Southern Maryland Agricultural Development Commission to purchase some vines.

“At this point, we have a 3-acre vineyard with 2,000 vines,” she said. “We have livestock and we have the wedding business. We are in the process of building our winery. We plan to have a tasting room where people can come in and taste our wine, purchase it on-site and have a nice day here. We have several tobacco barns. Actually, we’re converting an old tobacco barn into our wine processing facility. We hope to open in 2017.”

Watson Hardy said that the nearby Romano Vineyard and Winery helped her family learn about the vineyard and winery business. The Romano vineyard is the only winery currently operating in the county.

A member of the Maryland Grape Growers Association and the Maryland Wine Association, Watson Hardy said her family planted the first vines in 2014 and started the wedding business at the same time. She said they planted five grape varieties: merlot, cabernet franc, vidal blanc, chardonnel and chambourcin. It takes three to four years for the vines to mature enough to consistently produce grapes, she said.

The 40-by-60-foot horse barn, “The Stables,” was converted to a wedding barn and is used for other events, such as family reunions, private parties and business events. The interior features exposed beams, an upper-level hayloft, a 15-by-60-foot covered porch and an attached 32-by-60-foot outdoor patio. They average 100-150 events each year.

“My livestock here is mainly for my sanity,” she said. “They are my friends and my pets, and they make me smile everyday. I have four sheep, three pygmies, three laying hens, a horse and other miscellaneous animals, ducks and rabbits.”

Watson Hardy said making the transition to a vineyard did not require major financial outlays for equipment or buildings. The tobacco barns are well-suited for the operation, she said. They converted their tobacco planter into a vine planter and installed a trellis system of both wooden and steel posts. They’re installing the wire by hand.

During the first few years of vine growth, it is a common practice to limit the production of fruit. Last year’s harvest, she said, was used to make some wine.

“This fall we hope we will have a good harvest,” she said. “We will harvest the grapes by hand. We do plan on expanding the vineyards and do another planting next year. It’s agriculture; the main thing is to pray a lot and hope for good weather.”

Watson Hardy said an average grape harvest should produce 8,000 bottles of wine. A mobile bottler, mounted on a truck, will be used to bottle the wine, she said.

Her fiance, Bob White, an experienced winemaker who formerly owned a vineyard in the Westminster area, will be the vintner for the operation. Currently, Shelby and Wade have off-farm full-time jobs.

Watson Hardy was enrolled in Harrisburg Area Community College’s viticulture program at the Gettysburg, Pa., campus. On weekends, she took hands-on classes at the Hauser Estate Winery near Cashtown, Pa.

When selecting the varieties of grapes to cultivate, Watson Hardy said they considered the hardiness of vines in cold weather. Merlot is sensitive to low temperatures of about 5 degrees. Other varieties can survive to minus 5 degrees, she said.

A late frost, occurring after leaves appear, can affect a plant’s ability to produce fruit.

About 90 percent of the vine is removed in a hard prune. During the winter months the vines become dormant. After fall harvest, it’s time to prune again.

Grapevines, which are self-pollinating, thrive in cool, dry climates. Irrigation is not typically required, though Watson Hardy said they have access to water for irrigation purposes, if needed.

Well-drained soil is a must, she said, otherwise the plants are susceptible to downy and powdery mildew.

The only pest they’ve had to deal with is Japanese beetles.

The wine processing equipment has yet to be purchased, she said. A tobacco barn is being converted into a processing room. While they plan to bottle wine at first, at some point Watson Hardy said they would like to venture into using barrels.

With four tobacco barns and a hog barn, along with other buildings, the vineyard and winery operation has room to grow, she said.

Jeffrey B. Roth is a freelance writer covering northern Maryland and southern Pennsylvania.